Indonesia’s Rory Hie made it a start-to-finish effort at the inaugural $300,000 Classic Golf & Country Club International Championship 2019, winning his maiden professional title by a two shot margin from the field. However there was much to cheer for the Indians as a bunch of young stars finished in prominent positions with four of them featuring in the Top-eight. 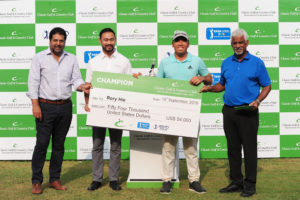 As Hie shot 68 to finish at 21-under, Rashid Khan, in the hunt till he mishit the 15th tee shot, carded 69 to reach 19-under and tie for second alongside Korean Byungjun Kim (67). Rashid’s bogey on 15th, coupled with Hie’s birdie on the same hole ended the Indian’s chances as the Indonesian playing in India for the seventh year in a row, made no mistakes and parred the last three holes.

“It was always my dream to walk up the 18th green with a two-shot lead and that’s what happened,” said Hie who won his first pro title since joining the paid ranks in 2008. He was once ranked No. 6 amateur in the world.

India’s newly minted pro, Aadil Bedi (66) in only his seventh Asian Tour start, logged his career-high fourth place at 18-under.

Aman Raj (66) equaled his career-best and Abhijit Chadha (71) achieved a new personal best on Asian Tour. Both were Tied-fifth at 16-under.

There were further celebrations in store for India at this Jack Nicklaus-designed course with India putting on another six players inside Top-20 for a total of 10 among the Top-20. Veer Ahlawat (66) and Karan Pratap Singh (67) were Tied-13th at 12-under and another four Kshitij Naveed Kaul (67), Karandeep Kochhar (68), Shivendra Singh Sisodia (68) and Viraj Madappa (69) were Tied-17th at 11-under. 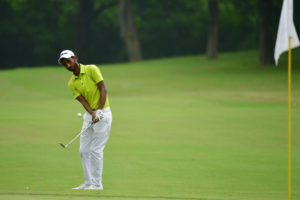 For Rashid, the finish was somewhat disappointing though he downplayed it. He had moved to within one shot of Hie overnight, On Sunday though, he just could not ignite his challenge. “I was just one shot behind after the 14th but hit a bad shot on the 15th which I bogeyed and Rory birdied. Just could not recover from that,” said Rashid, who got his third Top-10 finish in six starts on Asian Tour this year.

Rashid added, “Today was a little up and down for me. Couldn’t find the fairways in the start at the front nine and missed a lot of greens. Somewhere on the course I think I went against myself. My game is to attack the flag and I went a little safe today. Maybe it was because I was not able to find the fairways and from the rough it is really tough to control the ball.”

Hie was overwhelmed at the prize distribution ceremony, which also saw him pick up a winner’s cheque of $54,000. “It’s not really sunk in yet. But this has to be the biggest day of my life, no matter what happens from here on,” he said.

“The win will also open a lot of doors. Coming here, I wasn’t sure of what I would be doing next but I guess this makes things a lot easier for me now. I have always enjoyed coming to India, it has such friendly and welcoming people, and I have good memories of this course too which I last played 10 years ago,” the 31-year-old added.

Sunday’s result was in fact a red letter day for Indonesian golf too, as Hie became the first ever from his country to become a title-winner on the Asian Tour against a few top-five finishes in the past on the erstwhile One Asia Tour even though he was ranked in the world’s top six as an amateur.

At one point, Hie, Rashid and Kim were all in a tie at the top of the leader-board after the 13th hole before the Indonesian ripped off three birdies in a row and Rashid bogeyed the 15th to fall two behind. That was the turning point. 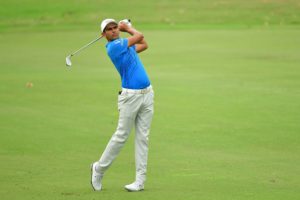 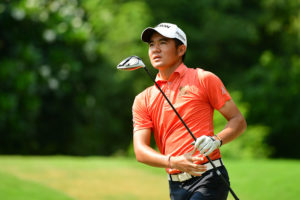 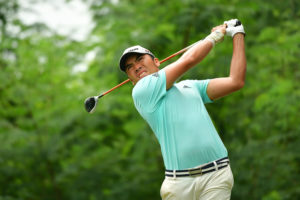 “I was getting a little distracted by thoughts of winning,” Hie admitted later. “But after the 15th, win Kim playing in the group ahead of us, I knew I only had Rashid to worry about. That two-shot swing was decisive, the turning point for my tournament.”

For Aadil Bedi it was a day to remember. Bedi underlined a strong Chandigarh presence in the upper reaches of the leader-board with three from the Garden City finishing in the top 20. Bedi, who is on his rookie year on the tour was rock solid through the day and his 6-under 66 was one behind the day’s best card of 7-under 65.

“I found something after my chip on the 13th hole lipped out. After that I just played more aggressive golf. Also, earlier in the week, I should have been a bit more patient and attack the flag selectively. But this all part of a learning process for me and I am glad to get my first top-5 finish and that too on home ground.”