There was heartbreak for Shiv Kapur at the very last hole as he fell agonizingly short of becoming the first-ever repeat winner of the $400,000 Panasonic Open India. Kapur double bogeyed the 18th to finish with 70 at 12-under, as Korea’s Joohyung Kim, who finished an hour before the Indian, shot seven-under 65 to reach 13-under. That clubhouse target also became the winning score. With his maiden Asian Tour win, Joohyung also became the second youngest Asian Tour winner.

Joohyung shot seven birdies in first 10 holes and then parred the remaining eighth to finish at 65 in windy conditions.

Kapur double bogeyed the last after hooking his drive and fell from sole lead at 14-under to 12-under and a tie for second with fellow Indian S Chikkarangappa. Kapur was second for the second time in as many weeks. 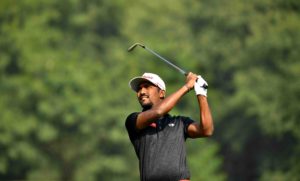 The 17-year-old Joohyung earned his Asian Tour card for the remainder of the 2019 season after claiming three wins on the Asian Development Tour (ADT) this year. He will now have an exemption for next season, too.

The Korean was making what was only his third start on the Asian Tour this year. But he produced another grandstand performance that belies his age with rounds of 70, 68 and 65 for a winning total of 13-under-par 203.

Joohyung said, “I’m really speechless. It has been a dream of mine to play on the Asian Tour ever since I was young. And it’s really wonderful to come here, be in contention and win. I cannot describe the feeling now. I’m still trying to learn every single step of the way.”

“Last week, I was one off the lead with two holes to play. But it didn’t quite work out the way I wanted then. So, going into today, I just tried to give myself as many chances as I could. I did that on the front-nine but I kind of struggled in my back-nine, knowing I was in contention. It was really windy today and I scrambled quite well. It was not easy to shoot a 65 under these conditions. But I managed to do it and now, I’m a winner!.”

Australia’s Terry Pilkadaris, who held a share of the overnight lead, signed for a 71 to finish in outright fourth place while Indonesia’s Rory Hie was tied for fifth with Chinese Taipei’s Hung Chie-yao and India’s Vikrant Chopra. Veer Ahlawat (69-69-70) was tied eighth on 8-under 208 in his best ever Asian Tour finish.

Chikka, also Tied-second, said,  “I’ve been superb on the par-5s this week as my strategy to lay up within my favourite yardage with my approach shots worked wonders. I was 10-under on the par-5s through the tournament. My hitting and putting were very consistent but my wedge-play was my only weak link this week.”

Arjun Prasad and M. Dharma were tied 11th on 7-under 209s, and Om Prakash Chouhan, Karandeep Kochhar, defending champion Khalin Joshi and Rashid Khan were all 6-under 210 and tied 14th.

Jyoti Randhawa was 2-under 214 for a share of 44th place while fellow Tour senior Jeev Milkha Singh was a further shot back on 215 and in tied 50th place.