Brooks Koepka secured his place in golfing history with a two-shot triumph at the US PGA Championship, where he went wire to wire to become the first male player to win his first four Major titles in less than two years.

The American entered round four with a record seven shot lead and still led by six with eight to play but his advantage was down to one as he stood on the 15th tee after a run of four bogeys.
On a brutally challenging day at the famously difficult Bethpage Black Course, the 29 year old was made to endure a nervy finish as the Long Island wind played havoc. Just as he looked to be cruising to a comfortable victory, Koepka bogeyed four holes in a row from the 11th and the seven-shot lead he began the day with was suddenly down to one. Koepka was accumulating bogeys faster than major championships. But he won the audience over in the end. But the pressure Dustin Johnson had been applying soon faded and back-to-back bogeys on the 16thand 17th meant he finished two shots back and relinquished his World Number One position to his friend Koepka, who signed for a final round 74 for an eight under winning total.

“D.J! D.J! D.J!” Those were the roars of Bethpage Black, as Dustin Johnson shaved off stroke after stroke, until a seven-shot lead had become one. It was amid such noise, that Koepka had to save himself. We knew how firm his resolve. Sunday, we found out the thickness of his skin.

Matt Wallace, meanwhile, secured his best finish at a Major Championship after battling to a final round 72 to finish in tied third alongside Jordan Spieth and Patrick Cantlay on two under. That moved the Englishman to second in the Race to Dubai Rankings presented by Rolex. 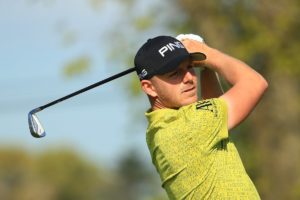 A fourth Major title out of his last eight puts him alongside Ben Hogan, Jack Nicklaus and Tiger Woods as the only players to win so many in so short a span, and he becomes the first wire to wire winner of a Major since Spieth at The 2017 Open Championship.

Two-time US PGA Champion Rory McIlroy signed for a one over par final round 71 to register his ninth top ten in his last nine starts, and he shared eighth place with Shane Lowry – who carded three sub-70 rounds at Bethpage – and South African Erik van Rooyen, among others.

Koepka becomes the first man ever to concurrently hold back-to-back U.S. Open and PGA titles. He is often just one of the crowd at regular PGA Tour events, but open the gates for a major, and he’s the guy making the ground shake.

History will record his two-shot victory at Bethpage Black and fourth victory in his past eight majors, something that hasn’t been accomplished since the prime of Tiger Woods. Koepka finished at 8-under 272, two shots better than Johnson. He has now won the past two PGA Championships and U.S. Opens. 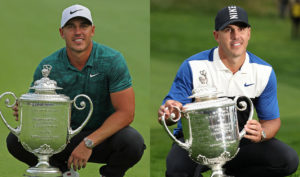 Koepka once drew inspiration from being golf’s underappreciated champion, but he can’t play that role any longer. Not after what he just did to Bethpage Black.

He is golf’s alpha and it’s not even close. There’s no longer any room for debate. Koepka returned to the top of the world ranking with this win and moved to second in the FedExCup. 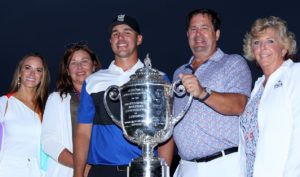 Brooks Koepka of the United States poses with girlfriend Jena Sims, his mother Denise Jakows, father Bob Koepka and stepmother Sherri Koepka with the Wanamaker Trophy during the Trophy Presentation Ceremony after winning the final round of the 2019 PGA Championship at the Bethpage Black course on May 19, 2019 in Farmingdale, New York. (Photo by Warren Little/Getty Images)

He’ll no longer be overlooked. He still could make that claim this week, even though he was the defending champion and winner of three majors in little more than a year. Tiger Woods was the talk of the town after winning the Masters and returning to the site of a previous triumph. They played together in the first two rounds, and all that Koepka did was beat him by 17 shots.

Koepka is just the 11th player to win four majors before age 30, and the fifth American (Walter Hagen, Bobby Jones, Jack Nicklaus and Woods). Koepka was one swing away from adding a green jacket to his collection of oversized silver trophies, as well.

His power game plays well on the game’s toughest layouts. He drives it far and (reasonably) straight. He can gouge iron shots out of the rough and onto the green, an asset that separated Woods from his competition during his best days.