The Golf Foundation 8th Invitational Fund Raiser Tournament was played at the Delhi Golf Club on the 26th of February 2021. A full house participation of over 100 golfers, which included the Camp of Excellence Juniors from Delhi Golf Club, showed up in strength at the bi-annual Fundraiser to lend support to a cause which is helping produce Golf Champions from India on a consistent basis, especially players from underprivileged and marginalised backgrounds.

The Tournament saw several very interesting innovations woven into the experience for all  participants. Besides the skills contests and innovative activities on course, four of the talented Golf Foundation wards were on the course displaying their talent. Khushi Hooda helped the participants on the 2nd hole with her drives, Savdeep Kadian helped with approach shots on the 15th hole while Rakshit Dhaiya and Yash Chaudhary helped the participants with putts on the 11th and 16th holes respectively. The assistance was in the form of the Golf Foundation kids playing shots from the same locations as the participants, who then had the choice of using their own shots or those played by the talented kids.

It is a testimony to the fact that the efforts of the Golf Foundation are being acknowledged by the golfing world when the event witnessed a huge turnout and tremendous sponsorship support inspite of the COVID situation. And they were rewarded with great weather, a golf course in pristine condition and innovations and prizes galore. The overall experience was good enough to bear with the COVID protocols and the consensual feedback was that the participants had an unforgettable experience.

Conferred the prestigious, “Rashtriya Khel Protshan Puruskar”(highest Award for Sports Promotion in India) by the Honorable President of India, Shri Ram Nath Kovind in 2017, the Golf Foundation’s efforts in this event were supported ably by sponsors and organisations

Results at a Glance:. 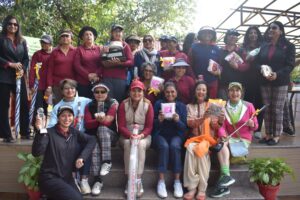