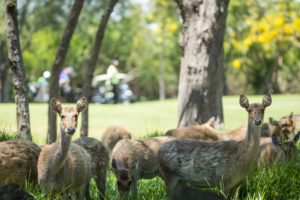 The local Deer on the course adding to the already spectacular scenery.

Constance Hotels, Resorts and Golf boasts hotels across the Indian Ocean including Seychelles, Maldives, Madagascar, Mauritius and most recently Zanzibar. Their properties are chosen for proximity to the ocean with some of the best beaches on the planet. Guests can also expect cuisine second to none and service with a personal touch that defines the entire experience. Constance Belle Mare Plage is located on the east Coast of Mauritius and is a short sixty-minute drive from Sir Seewoosagur Ramgoolam International Airport. From the moment you arrive the silver lining throughout your stay is a big smile from all the staff. From the chef, concierge, barman or starter at the golf course a huge smile and what seems to be a never-ending desire to satisfy your every request is the norm. The service is supported by a vast array of restaurants, water sports – both ocean and swimming pool – tennis courts, kiddies entertainment area, wellness center, Spa, bicycles and so the list goes on. The two-kilometer-long beach with straw umbrellas, soft incliners and the warm 28-degree Indian Ocean lapping at your toes is the cherry on top. The cliché ‘it has something for everyone’ rings true at this resort.

Golf is very much part of the brand offering and part of the experience they offer with golf courses in both Seychelles and Mauritius. The Mauritius property, Constance Belle Mare Plage boasts two majestic golf courses The Legend, is a par 72, 6018-metre Hugh Baiocchi design is anything but an easy resort course cut out of indigenous forest previously used for breeding deer with the odd sighting adding to the uniqueness of the layout. Recent years have seen a number of changes to the layout with opening up of the fairways and cutting back coast bush for ease of play. The resort also offers a second option for golfers at the more open and playable Links course. Shorter in length with less water and wider fairways this would be the better option for the casual golfer. Clark Dennis with the trophy after winning the MCB Tour Championship by eight. 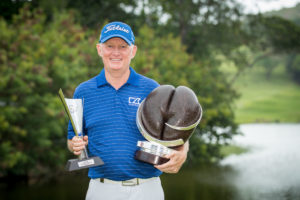 The European Senior Tour now referred to as the Staysure Tour, (U.K’s biggest travel insurance provider) made its 10th appearance in Mauritius in 2018. The title sponsor, Staysure, a first for the tour has been on board since 2018 making for a new and exciting era with increased prize money, tournaments and initiatives guaranteed to elevate it to a higher status. The latest initiative being an additional tournament to the MCB Tour Championship added at the end of the year where the tour carries on after Mauritius to the Seychelles to complete the ‘Indian Ocean Swing’. Mauritius Commercial Bank (MCB) has been a long-term supporter and partner to the tournament and with the support of Staysure have made this a highlight end to the tour. The idea is the 50-man field from Mauritius is whittled down to the top 29 players from the order of merit (with the addition of three lucky picks) to make up a 32-man field in Seychelles.

The year 2018 saw the 10th playing of the tournament, the eighth since MCB came on board, with a one of the strongest fields in history. No less than three Ryder Cup Captains; Paul McGinley, Ian Woosnam and Tom Lehman. Other big names in the field included South Africa’s David Frost, England’s Paul Broadhurst, Jarmo Sandelin from Sweden and France’s Jean van de Velde.

Due to possible inclement weather the tournament started with a two-tee start and the field was sent off in three-balls. South Africa’s Chris Williams started with faultless golf on the front nine with a total of six birdies to end on five under for the day. He was joined in the group at five under by Paul McGinley, Magnus Atlevi and Welshman Philip Price. The day however belonged to last year’s order of merit winner Clark Dennis who equalled the low round on the Legend course of 63.

The second day of the tournament saw Sweden’s Magnus Atlevi shoot the low round of the day to move within three of the leader. Having had one win in 2018 already he would not be overwhelmed by the occasion. His seven under par round saw him moving sharply up the leader board. Clark Dennis, however consolidated his position at the top of the leader board with six birdies and no blemishes on the card indicative of his form and a warning sign to others. Interestingly he did not arrive in good form but a word from his son on an old tip from a few years back got him back into the groove.

The final day of the tournament saw England’s Gary Wolstenholme fire off seven birdies and a bogey for a six under 66 to move up the leader board. Atlevi the closest contender to Dennis shot a respectable 69. The Texan continued with faultless golf throughout, not dropping one shot the entire tournament. His final round of eight under included four birdies on each nine with a tournament total of 23 under par and an eight shot win. The 2017 rookie and order of merit winner was heading to Seychelles with his sites firmly focussed on another win.

Seychelles needs no introduction with its bleached white beaches, indigo-blue water and palm fronds dancing on the breeze making for the perfect postcard perfect picture. We’ve all seen the pictures of the perfect Indian Ocean setting yet the reality is that these pictures do no justice to the real thing. When you do encounter, the coarse white sand squeezing between your toes, and lay eyes on the filter-clear water, your brain does a numb tap dance. This is because it’s never seen anything quite like it and with no yardstick to go by, it’s unsure of how to classify or categorise the information.

Constance Hotels, Resorts and Golf boasts two hotels in Seychelles. Constance Ephelia on the main island of Mahe and the smaller, more private, Constance Lémuria on the small island of Praslin a short 15-minute flight. The resort, although not massive, gives a feeling of space and privacy, with a variety of villas and rooms to accommodate the discerning tastes of any traveller. Food is an important part of the Constance Lémuria attraction and with five restaurants and five bars available, each dining experience is completely different from the next, yet equally unmissable.

Daily routines at Lemuria may vary from guest to guest but relaxing on the beach, or by the pool while sipping cocktails and catching up on a good novel, always seems to be a strong contender. For the less sedentary, you can slide into the warm waters of the Indian Ocean and simply float about, or throw on a snorkel and fins and enjoy what it feels like to swim in an oversized tropical fish tank. A variety of water sports are available from kayaking and sailing to scuba diving and deep-sea fishing. Tennis, gym and bicycle rides for the health- conscious guests can be followed by a visit to the spa, where relaxation is taken to a new level.

Constance Lémuria boasts the only 18-hole course in the entire Seychelles region, with the course being as unique and diverse as the islands. Designed by Rodney Wright and Marc Farry, this par-70 layout is somewhat of a Jekyll-and-Hyde scenario with the first 12 holes at being fairly open, meandering through the palm and mangroves forests contoured by tidal inlets. The final six holes are located on the ‘other side’ of the road. Here the true test begins as the course traverses through a coconut forest, with steep inclines, sharp descents and landing areas that feel tighter than the width of the bar at the 19th hole. The par-three 15th is the feature hole and at 150 metres in length, this short hole is a jaw-dropper, with the green way below and a thin strip of mangrove trees separating it from what is reputed to be one of the most beautiful beaches in the world, Anse Georgette.

The course at Constance Lemuria had to undergo extensive changes to host a Staysure Tour event. The changes which begun in 2016 included a re-routing of the course, contouring of certain greens and the introduction of a driving range. It was the first time for the tour to play the course and the 32-man field was not disappointed. Unfortunately, heavy rains did hamper the progress of the tournament and day one had a unique two-tee start from the first and sixth tees with the field only playing 12 holes of the course. After 12 holes the man atop the leader board was American Tom Lehman. He got off to a scintillating start with four birdies in the first six holes. Unfortunately, he did drop a shot on the last (12th hole) to finish at three under par.

Against all odds and predictions day two had no rain, allowing players to enjoy the full 18 holes of the course. The day belonged to Spain’s Miguel Angel Martin with an unbelievable nine under 59. With the shortened course par 68, although still highly impressive, cannot rank amongst your genuine 59’s. Going into day three with a five shot lead it was his tournament to lose.

The final day of the tournament saw Welshman, Philip Price, being the first to make a move up the leader board after starting the day at one under par. A late flurry of birdies on holes 14 to 17 saw him sign for a total of six under. England’s Roger Chapman also played steady golf and needed a birdie on the 18th to move to seven under. A par was all he could manage meaning a playoff between him and Price followed on the 18th. Both men hit excellent approaches to reach the par five in two. Chapman was first away and sunk his eagle putt, Price unfortunately couldn’t follow him in, meaning victory went to Chapman. The win meant he took home the Seychelles MCB Tour Championship trophy as well as the Indian Ocean swing trophy for his combined effort at both tournaments. “I was just happy to get into the tournament after doing well in Mauritius. At the end of May my arm was in a sling and I wasn’t sure if I would play much more golf this year, so I am thrilled to bits to win the MCB Tour Championship in Seychelles,” Chapman said after the round. “2012 was my last victory so to be in the winner’s circle again I am delighted.”

This brought to an end the final tournament of the year for the Staysure Tour leaving the players to return home and dream about the amazing locations Constance Hotels, Resorts and Golf has to offer. Undoubtedly one of the biggest motivators for the year ahead would be to stay in the top 50 of the order of merit to once again return in 2019 to the Indian Ocean Swing. 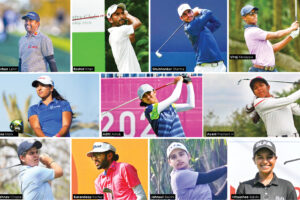