Day one of the eighth MCB Tour Championship played at the Legend course at Constance Belle Mare Plage, Mauritius got off to a sizzling start. Due to possible inclement weather a two-tee start was implemented and the field was sent off in three-balls. South Africa’s Chris Williams starting with faultless golf on the front nine with a total of six birdies. 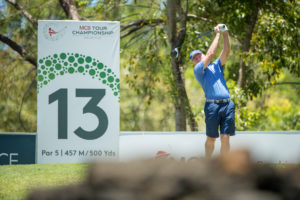 “I hit the ball very very solid and was just in remote control for the first 15 holes”, he said. The back nine was not as stellar and bogeys on 16 and 17 slowed his progress “I just got a little unlucky on 16 and 17 but that happens. I knocked in a tester for birdie on the 18th which was a good way to finish off”, he concluded. The saying ‘beware the injured golfer’ rings true as he was suffering from a stomach ailment. He was joined in the group at five under by Paul McGinley, Magnus Atlevi and Welshman Philip Price. One back on four under are 1991 Masters tournament winner and 2006 Ryder Cup Captain Ian Woosnam, England’s Roger Chapman, Spain’s Miguel Angel Martin, Jarmo Sandelin from Sweden and David Shacklady from England. Last year’s winner Thaworn Wiratchant from Thailand shot a one under 71. Last year’s winner Thaworn Wiratchant from Thailand not able to reproduce his stellar golf from 2017. The day however belonged to last year’s order of merit winner Clark Dennis who equalled the low round on the Legend course of 63. The blemish-free round included seven birdies and an eagle coming from a chip-in on the 13th. Leading by four puts Dennis in a dominant position with the rest of the field with everything to do come day two at the MCB Tour Championship.