With the promise of many firsts in the Indian Golf Circuit, Ballantine’s, from the house of Pernod Ricard, teed off the Ballantine’s Golf Championship recently. The ongoing championship that has a footprint across 11 major cities in India saw the 22 finalists from these cities, two winners from each city, battle it out for the honors at DLF Golf and Country

The national final winners – Dr. Prasad Mahadevan and Shirish Godbole will now travel to Scotland for a money-can’t-buy experience to play in and around St. Andrews, the home of Golf in Scotland.

The championship was brought to a befitting end with a gala celebration that became the talk of the town. The evening counted in its audience the crème de la crème of Delhi NCR, in addition to the 22 winners of the league stage, pro golfers and opinion leaders of the golfing fraternity in India. The key highlights of the evening included live band performance by Nesa Shetty and The Copycats followed by a performance by DJ Avantika Bakshi.

Speaking about Ballantine’s Golf Championship, Mr. Kartik Mohindra, Chief Marketing Officer, said “Greatness in the game of life always stems from self-belief. Something Ballantine’s has unwaveringly stood for. It lionises and celebrates self-belief in individuals. Inspiring them to stay true to their passions and excel on their own terms. The game of golf is a reflection of these values. Every golfer has his or her unique swing and stroke. The Ballantine’s Golf Championship celebrates these unique quirks, and drives you to stay true to YOUR game.

Resonating with the fact that the soul of Ballantine’s and golf is Scotland, this tournament takes the brand’s timeless affiliation with the game even further by setting new precedents – including India’s first ever mixed pro golf challenge. This tournament, with its nationwide footprint, is an attempt to bring the illustrious sport of golf on the map of India.We believe that through this initiative, we will inspire and bring together a tribe of Indian golfers to raise toasts of accolades and conviviality, as well as engender a great exchange of ideas. Golf and Ballantine’s: both a class act. Made for the discerning.” 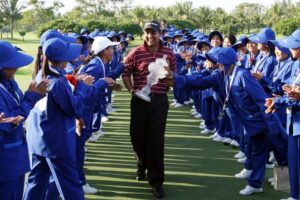