Bengaluru’s Chikkarangappa S saved his best for the last as he shot a final round of seven-under 65, the day’s joint best score, to emerge victorious by two shots at the TATA Steel PGTI Players Championship Presented by Govt. of Haryana & Panchkula Golf Club (PGC).

The 27-year-old Chikkarangappa (69-65-69-65), who began the day in third place, three shots off the lead, put up a determined performance on the last day to end up with a tournament total of 20-under 268, two shots ahead of the rest at the Rs. 50 lakh event. The former PGTI Order of Merit champion had nine birdies and a double-bogey to show on his card as he wrapped up his 15th career title and 14th win on the PGTI.

Gurugram’s Veer Ahlawat (67-62-71-70), the leader in round two and three, was unable to hold on to his overnight two-shot lead as he fired a 70 to finish runner-up at 18-under 270 on a day that witnessed a constant light drizzle.

Chikkarangappa made an early charge in round four as he collected five birdies on the first seven holes and draw level with leader Ahlawat. Chikka, who represented India at the 2016 World Cup of Golf, then suffered a setback with a double-bogey on the eighth but came roaring back with birdies on the 11th and 12th that helped him restore parity with Veer.

Chikka’s finally saw it home thanks to his excellent chipping and putting that earned him birdies on the 15th and 16th. He picked up a cheque of Rs. 8,08,250.

Chikka said, “I’ve been in contention at Panchkula Golf Club on several occasions in the past having played in the leader group on the final day virtually every time in the last few years. But somehow I never won here. So I’m glad to finally have a win at PGC.

He added, “I enjoy being under the gun. That seems to bring the best out of me. I always pull out great shots when I’m under pressure. That’s exactly what happened today.” 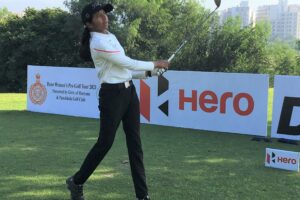