Matt Wallace admitted to having thoughts of winning the Hero Indian Open trophy sometime in the middle of the round on the third day. And to think, he was three-over after first eight holes of the week.

The third day was the day when the DLF Golf and Country Club was at its toughest. He shot a grinding 70 and that took him atop the leaderboard alongside the home boy Shubhankar Sharma.

It had yielded a 65 and 66 to Emiliano Grillo on first two days and it produced a 64 for Shubhankar on second day. But on the third day, when Stephen Gallacher shot the best of 67, Wallace produced a 70.

And on the final day with the conditions once again a little better, Wallace’s 68 and Johnston’s 66 brought them together at the finish and then Wallace pulled away.

While Wallace won, Johnston was second and Shubhankar was Tied-7th, his second successive Top-10 in as many weeks.

“It was a disappointing day for me. I had a few bad swings at the start that put me off my rhythm. The double-bogey on the fifth compounded my problems. Thereafter, it was all about trying to catch up with the lead,” said Shubhankar.

“I had a few birdies today but there were just too many bogeys for my liking. But these things happen. Regardless of the result I’m quite happy that after being five-over through the first nine holes of the tournament I managed to finish with a four-under total.”

He added, “I thank the crowd here at the DLF Golf & Country Club for their outstanding support through the week. A lot of good things have happened with me over the past few months, I’ll now try my best to carry forward the momentum in the coming months.”

Wallace said, “I played great. Ever since being three over through eight at the start of the week, I’ve played some of the best golf of my life and to do it in that style at the end there capped it off.”

“Beef really had a great round today because I was playing fantastic and thought I might have been a few more clear.”

“I hit some really good shots and that play-off: I pumped it down there on the last and it went a long way and then a four iron went even further than I thought it would, so I was jacked up a bit. To hit two shots like that is exactly why I play the game.”

“With the people that were coming up behind me, there were some real class players. Beef’s putt on the last should have gone in but it was just my day today.”

On the final day, when the local lad stuttered despite a decent start with two birdies in first four holes, Wallace stood firm with four birdies on the front nine. A fifth birdie on 10th gave him a handy lead. As Shubhankar fell down with two doubles on front nine and a third on back nine, Wallace was steady.

Only Andrew Johnston was his worry and that stayed right till the end. When Wallace opened the door with a bogey on 16th, Johnston playing a group ahead birdied 17th and the two were locked in a tie at 11-under in regulation.

Wallace, a prolific winner on the Alps Tour – an European circuit below the European Challenge Tour – played the way he has all week. He went for the green on his second at the par-5 18th and he reached it fine. He birdied, while Johnston, who had layed up each day did the same and managed only a par handing the Trophy to Wallace.

Wallace received the Trophy and his cheque for US $ 291,660 for his second European Tour win from Mr. Pawan Munjal, Chairman, Managing Director and CEO of Hero MotoCorp.

Kshitij Naveed Kaul, 18, was the top amateur, while Shubhankar (4-under 284) won the Indian Golf Union prize for being the top Indian player.

Wallace entered the final day with a share of the lead and a closing 68 got him to 11 under, a total matched by compatriot Johnston after a 66.

Wallace hit a huge drive down the 18th on the first extra hole and with Johnston laying up and seeing his birdie putt agonisingly lip out, the 27 year old had two putts for the title after hitting a brilliant second onto the putting surface.

He rolled his first up to the side of the hole and tapped home to seal a second victory in 32 appearances after last season’s triumph at the Open de Portugal at Morgado Golf Resort.

Argentinian Emiliano Grillo was then five under, with home hero and Race to Dubai Rankings presented by Rolex leader Shubhankar Sharma and Scot Stephen Gallacher a shot further back.

Wallace was playing on the Alps Tour in 2016 but six wins that season – including five in a row – got him onto the Challenge Tour and he continues his meteoric rise following the victory in Portugal in just his fourth European Tour event.

Previous Post The Hero Indian Open, 2018: 'Matching' excellence and beauty
Next Post Is Women's Golf Really in the Pink? 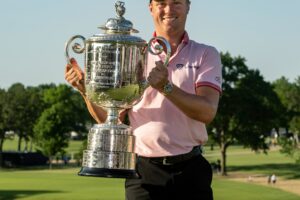 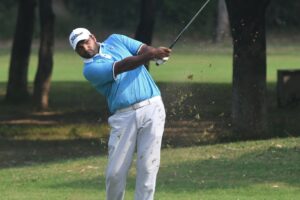