Generally considered one of the most picturesque and famous layouts in all of golf, the Pebble Beach Golf Links on California’s Monterey Peninsula celebrates its 100th anniversary by hosting a U.S. Open for the sixth time.

This version is filled with compelling storylines.

(He will be attempting to become the first player since Scotland’s Willie Anderson in 1903, 1904 and 1905 to win the U.S. Open three straight years). 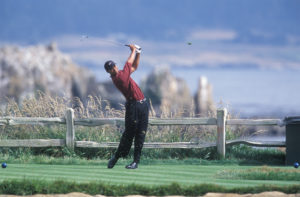 Tiger Dominated the 2000 US Open. Photo courtesy of USGA by John Mummer

Will any recent champions such as Dustin Johnson (2016), Jordan Spieth (2015) or Justin Rose (2013) take home the victor’s share of the $12 million purse? Will luck shine again on Irishman Rory McIlroy? What about a comparative unknown taking it all? How will Tiger Woods do after the Masters victory last April, his 15th major? While he will have lots of fan support, can Phil Mickelson, at age 48, finally complete the career grand slam?

Mickelson, who won the AT&T tournament held earlier in the year at Pebble Beach, knows all too well that winning in February is different than in June under USGA course conditions.

“It just plays so different in that when its wet and you can fly the balls onto the green and stop them no problem you can stop them out of the rough, but you cannot do that in the US Open as firm as they get. And the fairways are much tighter.

And in February I’m hitting drivers and hitting it as far as I can having a lot shorter shots in, whereas here (at the U.S. Open), I’ll be trying to hit fairways with irons and hybrids and such just to get the ball in play and then coming into those small greens with a lot more on your club.  So, it’s a whole different golf course where you’re playing almost defense, playing for par first and then trying to make birdie where as in February it is full bore all out, go make birdie on every single hole.” 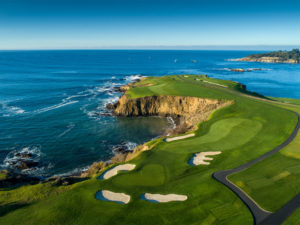 In addition to the fickle winds that never settle in one direction or speed, players will also have to contend with the fact that Pebble Beach has by far the smallest greens played on the PGA Tour (a mere 3,500 square feet average) with often-severe slopes both side-to-side and back to front. To add to the challenges, there are more than 100 bunkers. It is enough to test the mettle of the world’s greatest players as they vie for one of the most prestigious titles in the sport – U.S. Open champion.

Pebble Beach will play short, just over 7,000 yards with a par of 71, but that is in keeping with its history. Here are the winning scores, yardage and par for the five previous U.S. Opens (note for the 2000 U.S. Open the second hole was changed from a par-5 to par-4):