The Honda Classic beckoned Sunday morning with the potential to be a runaway, with Daniel Berger, a local boy, in the lead by five. That’s a pretty commanding advantage at most places. The Champion Course at PGA National, though, stands as a brutish bouncer at the door. It simply wouldn’t allow such a thing.

Instead, we got drama – heaps of it, in fact – and a late rain shower, an uncharacteristic off-day from Berger (74) and a first-time winner in Sepp Straka. Straka, a Georgia Bulldog by way of Austria – how many Austrians do you know with a Southern drawl? – started terribly with a missed 2-footer for par at the first hole, but finished brilliantly. He made birdies on three of his last five holes, played the Bear Trap in 1 under, shot 4-under 66 and became the first Austrian-born player to win on the PGA TOUR.

Oh, and now a Masters invitation beckons, as well. It was a lot to take in for a 28-year-old who moved to Valdosta, Georgia, at age 14 and later became a Georgia Bulldog.

“It’s crazy,” Straka said. “It’s a lifelong dream of mine just to be heading to Augusta in a month or so. It’s still surreal. I’m sure it’ll sink in here before long, but yeah, it’s just crazy.”

Tied with Shane Lowry as he arrived at the par-5 18th hole in the day’s penultimate group, Straka ripped a 334-yard bullet off the tee, hit 6-iron from 192 yards safely onto the putting surface in a sudden downpour, and cozied his 48-foot putt for eagle just 9 inches short of the hole. He tapped in for birdie to finish at 10-under 270. Behind him in the wet left-side rough stood Lowry, the gritty Irishman who captured the 2019 Open Championship at Portrush. He had done so much good all day, played so well, but Lowry struggled in the rain, a poor third shot leaving him 43 feet to try to force extra holes. The birdie putt drifted off short. 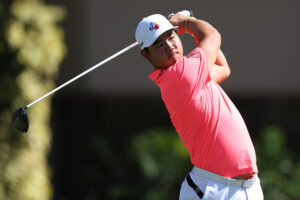