Tokenism or Signs of Brokenism?

Each year, on the first Tuesday in June to be precise, Women’s Golf Day (WGD) comes around, before disappearing back into the shadows for a further 12 months, the aim being to focus, for an entire 24 hours, on women’s golf around the world.

Supported by all the key organisations involved in the promotion of golf, including the R&A, the International Golf Federation (IGF) and the PGA TOUR, as well, of course as the LPGA, Women’s Golf Day was formed in 2016, but, like much to do with golf in 2020, the occasion, scheduled for 2nd June, was put on hold for a year due to COVID.

But, asks our Bunker Mentality correspondent Mike Wilson, given the notion of a Men’s Golf Day would be laughed loudly out of court, is WGD little more than a money-making gimmick which, when viewed through less than rose-tinted spectacles, could in fact be holding women’s golf back by perpetuating the myth that it is important just once a year? Every year since 2016, just before the first Tuesday in June, every golf journalist in the world receives a veritable deluge of media materials hailing Women’s Golf Day, extolling the virtues of wives and daughters, schoolgirls, sisters, aunts, female cousins, widows, even grandmothers taking up and keeping playing the royal and ancient game.

It’s all very worthy and well-meaning, high on genuine enthusiasm, what’s not to like about the notion, which everyone in golf has known about for decades, that the game needs more women playing it than ever before.

A video on the US-based WGD website tells us, “Women’s Golf Day is an event celebrating girls and women playing golf and learning the skills that last a lifetime.

“Women’s Golf Day is one of the fastest growing movements in golf, with more than 900 events taking place in a staggering 52 countries in 2019,” adding, “It takes place each year on the first Tuesday of June with the aim of introducing more females to golf and celebrate existing players.”

A subsequent update breathlessly reveals, “66 countries, 47million social media impressions, reaching 25million people,” all of which is great news, but, in the broader scheme of things, in the real world of pressing for more women’s golf to be made available and played, not simply through a high-profile, one-day landmark event but over 365 days each year, it barely amounts to a hill of beans.

And whilst it is true that women’s golf may be showing some signs of weak but sustained growth – at the same time as trends in the men’s game are heading in the opposite direction at a worrying rate – the harsh fact remains that at all levels, from grass roots to club golf and beyond into the elite professional ranks, women’s golf remains a million miles behind its male counterpart.

Expressed in its most basic – some might say crudest – form, namely money, hard cash, prize money, women’s golf is still stuck in the dark ages, the LPGA Tour season offering a total of US$70.55m, a tiny fraction of the whopping US$450m up for grabs on the men’s tour.

Therefore it’s clear, there is a vast disparity – more of a yawning gulf – between what the respective genders are worth in the eyes of golf officials, in league with TV moguls and marketing executives, perversely, many of who are women.

Asks one leading LPGA player, who did not wish to be named but who has multiple titles and several ‘Majors’ to her name, ”Exactly what’s the point of a women’s golf day,” adding, “There’s not a men’s golf day, its golf for them each and every day, and that’s how it should be for us women players, not pigeon-holed into one summer’s day each year.”

She adds, “When it comes to prize money, we play exactly the same format as the men, generally 72 holes of strokeplay, same equipment, same golf balls, essentially the same golf courses and under identical rules, so if it’s good enough for WTA tennis players to earn equal prize money to their male ATP counterparts at the four Grand Slam events, then why not golf?”

Meanwhile, both main governing bodies for golf, the USGA, which covers North Amwerica and Mexico and the R&A, which is responsible for the rest of the world both support Women’s Golf Day, but insist their support for women’s golf goes far beyond that.

Jackie Davidson is leading the work on the Women in Golf Charter and associated initiatives for The R&A and says, “One of our goals as an organisation is to attract more women, girls and families to play golf and so we support proactive initiatives like Women’s Golf Day which are aimed at promoting golf to women and increasing participation.”

She adds, “More is being done than ever before to encourage women and girls into golf and promote the sport as an accessible and inclusive activity that can be frequently enjoyed by people of all ages, abilities and backgrounds,” concluding, “We can achieve significant change for golf if we work collectively to develop successful participation initiatives that will inspire more women and girls to play golf on a regular basis and we believe that good progress is being made in this regard.”

Yet the R&A is the very organisation which recently took over full control of the Women’s British Open, now running it in tandem with the venerable men’s Open Championship but which is willing to tolerate a prize fund for the women’s event of US$4.5m, compared to US$10.75 for the men’s event.

Why, with its considerable cash reserves and multi-million annual turnover does the R&A not make a big, bold statement of intent that says, ‘Women’s golf is valued every bit as much as men’s,’ a relative drop in the ocean in regard to the organisation’s financial might.

Thus, at a stroke, doubling the prize money for the event recently won by German outsider Sophia Popov at Royal Troon (a course also on the Open Championship roster) to US$9m, at the same time as twisting the arms of its Open Championship ‘Patrons’ to support the women’s equivalent?

That too, like Women’s Golf Day might also smack of tokenism, but, unlike WGD, which is a passing annual fad with limited financial fire-power and is promoted by a worthy but peripheral organisation in the USA, but, year-on-year, near-equal prize money would make a monumental statement to the rest of golf and society at large.

And let’s not forget, it was – and remains – the same R&A which, under new-broom CEO Martin Slumbers came boldly out to in effect warm men-only members’ clubs like Muirfield and Royal Troon that they would lose their place on the Open Championship roster unless they changed their ways and their gender equality policies, something both succumbed to in pretty short order.

That’s what true, bold leadership can and does do to bring about change when, not too many years ago, the status quo seemed absolutely fine.

Before COVID-19 kicked in and skewed golf participation surveys to within an inch of their lives, evidence showed more and females taking up golf, narrowing – if not closing – the gap left by the legions of males giving-up the game, participation programmes such as Girls Golf Rocks and Love. Golf, continue to encourage women to give the sport a try.

Analyses of millions of rounds of golf played in the UK in 2018 found a surge in participation of the game by women and girls, up by by nearly 17% in the calendar year, the HowDidiDo survey revealing female golfers now make up more than 14% of the club members who registered in 2018, suggesting that the ratio of female golfers in golf clubs is rising following several years of stagnation.

And recent indications from the USA suggest an even stronger increase in women and girls playing golf, a 2018 National Golf Foundation survey showing that almost a quarter (24%) of all US golfers are women, although that pales into insignificance compared to Germany where 39% of all golfers are female and both the Netherlands and Sweden on 33%.

But progress is slower here in India, where despite professional success (three Ladies European Tour titles, including the 2016 Hero Women’s Indian Open on home soil) and a 2016 Olympic debut for Bangalore’s Aditi Ashok, who said ahead of the Rio games, “Because we don’t have that many girls playing [golf] and this will definitely boost the popularity of the game in India and that’s what we need, so I hope I can do that.

“I think it will be important because golf is new in India,” she continues, adding, “It’s getting [more] popular than it was like five, 10 years ago, but it’s still not where it should be.

“Golf becoming an Olympic sport is definitely going to help [and] we are hopefully going to have more golf courses and kids taking up the sport,” concluded Ms Ashok, who finished a disappointing 41st in Rio four-years-ago.

Champika Nanda Sayal, Secretary General of the Women’s Golf Association of India explained some of the hurdles faced by women taking up golf in India, telling CNN Living Golf, “There is a fear that it is difficult, it’s expensive, time consuming and male orientated, but we must continue to break down barriers and get more women playing golf.”

But, locally, regionally, nationally and globally, whilst there are more women and girls playing golf than a decade ago, those who make up 51% of the world’s population remain badly underrepresented when it comes to playing golf, and it will take a sustained effort and not just a World Golf Day to turbo-charge female participation.

As the unnamed LPGA star and Solheim Cup player says, “We need much, much more than a token day dedicated to women’s golf each day,” asking, “Why is there not a World Men’s Golf Day?

“Because,” she says, “Every day is a Men’s Golf Day, and it is going to take considerable time, a lot of money, courage and a concerted effort by the governing bodies if parity is ever to be achieved, and, with the number of male players falling year-on-year, the future of golf could rest in womens’ hands.” 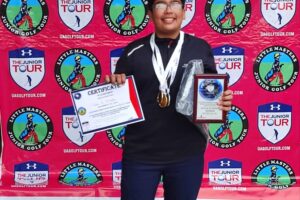 Udai books a spot at the UA World Championship