Rory McIlroy capped off a big weekend in Las Vegas on Sunday by surging past Rickie Fowler and holding off Collin Morikawa to win THE CJ CUP @ SUMMIT for his 20th PGA TOUR title.

McIlroy seized control with a 35-foot eagle putt from just off the green on the par-5 14th and then playing mistake-free down the stretch for a 6-under 66 and a one-victory.

McIlroy is the 39th player to win at least 20 times on the PGA TOUR, and it’s his fifth straight PGA TOUR season with at least one win.

Fowler, who started the final round with a two-shot lead as he tried to end nearly three years without a victory, faded with a pair of three-putts and shot 71 to tie for third. The threat came from Morikawa, a member at The Summit Club, who shot 29 on the front to get in the mix and closed with an eagle for a 62.

That forced McIlroy to play mistake-free after his big eagle putt on the 14th, and he never came close to a bogey in finishing at 25-under 263.

He went into the weekend nine shots out of the lead, made up plenty of ground with a 62 on Saturday and then pulled away by taking advantage of the scoring holes.

It was similar to his first win on the PGA TOUR in 2010 at Quail Hollow. McIlroy was nine shots behind going into the weekend at that tournament and closed with rounds of 66-62 to win. 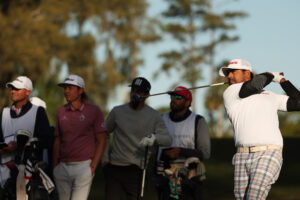