Chaitanya Pandey was among the five players to complete back-to-back wins at the 2021 US Kids Golf India North Tour at the ITC Classic Golf and Country Club. Playing in the Under-10 segment, Chaitanya, who went through a play-off in the first event on Thursday won by three shots over the Dubai-based Siddhaan Chibber.

The other young stars completing a second time in the double header in the US Kids Golf North Tour were Samar Baijal (Boys Under 7), Shambhavi Chaturvedi (Girls 9-10), Parnika Sharma (Girls 11-12) and Mahreen Bhatia (Girls 13-14).

The youngest winner on Friday was Nalinaksh in the Boys Under 6 and he shot 7-over 43 in his nine holes at the ITC Classic Golf and Country Club.

Another popular winner was Prince Bainsla in the Boys-under 11 and he got a big ovation when he went up to get his winner’s gold medal after scoring 3-over 75 beating Armin Paul Singh, the winner in the first event, by three shots. In the first event Armin won by one shot over Prince. In the Girls Under 8, Aanya Dandriyal, who was third in the first event a day earlier, turned the tables and beat Annika Chendira by one shot in the nine-hole tussle. 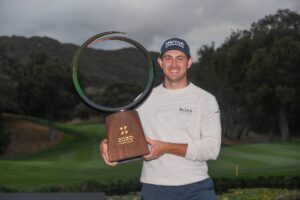