Spanish golf star Jon Rahm returned to his winning ways at the Mexico Open at Vidanta last weekend, where the 27-year-old secured a one-shot victory to earn his seventh PGA TOUR title in six seasons. It was an especially poignant win for the Spaniard, who will soon welcome a second child to the world with his wife Kelly.

They say in Spain that kids come with a present under their arm, and the second one has already given me that present. I couldn’t have asked for anything more. My first boy, Kepa, gave me the U.S. Open last June and this next one has already given me this win before he’s even out. Obviously it means something more meaningful in life than winning a golf tournament, but I’ll take it this way and hopefully I can get another win before he comes out this summer.

It was great that my wife Kelly and Kepa were on the 18th greenside. At one point when I was reading the break, I saw them walk up to the front and I thought, ‘I’d better two-putt this to make sure we enjoy this winning moment.’ Kepa was still very young when I won the U.S. Open last year, and I think he’s still a little too young to remember this. I was hoping I would get that moment of him running towards me but I think he got a little bit overwhelmed. But it was still really cool I could enjoy the win with my family. It’s a lot more fun and meaningful when they’re here.

I know I have my good qualities, but Kelly is a heck of a person. She’s got so many great qualities and for my part, it’s to never give up and always be positive. I think that’s one of my traits. Yes, I might seem frustrated sometimes and I might let some anger out or say some things, but I’m always hopeful and I’m always positive. That was the key to my win. I never lost faith, I never lost my approach or my confidence, and that’s why I got it done.

When it’s go-time, it’s go-time. When it’s over, it’s over. I’m a very different person on and off the golf course, especially when I’m competing on a Sunday. That’s the stressful part of the job. You’ll see a much more serious face and a much more intense look outside. I consider myself very lucky to be in the position I’m at in life. I’ve got a wonderful family and a wonderful life. Again, I count my blessings.

I’m honoured to win the Mexico Open at Vidanta. I was close to winning at Chapultepec (World Golf Championships-Mexico Championship) a couple times previously and didn’t quite get it done. I feel like there was always something I left behind every time I finished that tournament. Hence, I came to Vidanta wanting to win this tournament.

I’ve spoken at length about the importance of Seve Ballesteros and his impact on the game of golf and how I play because of him. Nowadays we have a much bigger reach. The PGA TOUR has become a bigger tour, and with social media we’re worldwide stars, bigger than we were in the past. I feel like I can make some impact in Mexico as well, and Mexico deserves a good event. You can see golf is growing over here.

It was a wonderful week at a wonderful resort. For anybody watching that is doubting about playing here, I say come. Just coming to the resort, it’s worth it. The golf course, it’s a lengthy golf course and it’s in pristine shape. It’s a highly recommended week in my book. I’ll be back obviously to defend and, you know, it feels good to get this first win done early in the season. I had a couple chances early in the year and I couldn’t close it out. I got close in Hawaii and Torrey and since then, I have not been close. So I’m happy. I kept working hard even though the results weren’t going my way.

It’s just how the game is. I knew I was improving, I knew I was seeing results and winning in Mexico  has proven that. I think playing on Sunday at The Masters with Tiger Woods gave me quite a bit of confidence. I think I just got a little too technical in my approach. I’m very much a feel player and that Sunday at Augusta, I told myself just to go out there and hit the golf ball, make shots, see the ball flight and execute. I shot a 3-under without having my best stuff on a tough day.

So I applied the same strategy in Mexico: Minimal technical thoughts, visualizing ball flight and getting back to my true self. I truly saw the difference. My iron game was really, really solid, especially into the wind. I was able to hit really, really good ones. Sometimes we deviate from our path but this time we didn’t, and I’m happy to get my first win of the season and get back up there in the FedExCup standings and hopefully get my second one soon.

It would have been a lot easier to play 18 with a two-shot lead, let me tell you, instead of being the stress that it was. Still, I’ve had the enjoyable walk in the past and I think this is the first time I had to kind of buckle up and finish it in style and strong and I was able to do it. Also it was my first wire-to-wire victory and even though it was hard at the end, I’ll take it.

Note: Jon Rahm is currently ranked No. 2 on the Official World Golf Ranking and No. 6 on the FedExCup standings. You can watch him compete on the PGA TOUR on Eurosport and GOLFTV powered by PGA TOUR. 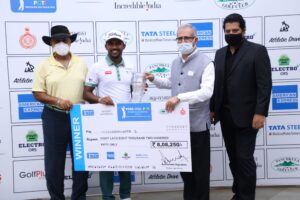