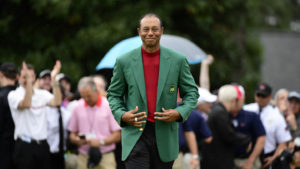 Tiger Woods completed one of the most incredible comebacks in sporting history to win an emotional 15th Major Championship by one shot at the Masters Tournament.

The American’s last Major title came at the U.S. Open 11 years ago and since then he has undergone numerous back surgeries, falling to 1,199th in the Official World Golf Ranking just 17 months ago.

A return to fitness and form in 2018 hinted at what was to come, and a closing 70 at Augusta National Golf Club secured a fifth Green Jacket at the scene where he burst onto the world stage in 1997. 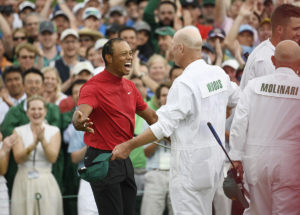 Woods’ record 12 shot victory 22 years ago set in motion a remarkable run of dominance at the top of the game, and the 43 year old will now once again have his sights set on Jack Nicklaus’ record of 18 Major Championships, after following Nicklaus to become just the second player to win the Masters in three different decades, and to win Major Championships 20 or more years apart.

Woods had been two shots clear standing on the 18th tee, but despite a bogey on the last, wild celebrations followed his final putt, which took him to 13 under par and one ahead of countrymen Dustin Johnson, Brooks Koepka and Xander Schauffele, who was making just his second appearance at The Masters.

Overnight leader Francesco Molinari had been right in the mix before finding water twice on the back nine, and the Race to Dubai Champion finished at 11 under par alongside Australian Jason Day and Americans Tony Finau and Webb Simpson.

Spain’s Jon Rahm was then one shot further back in a tie for ninth place alongside Americans Patrick Cantlay, Rickie Fowler and Bubba Watson. 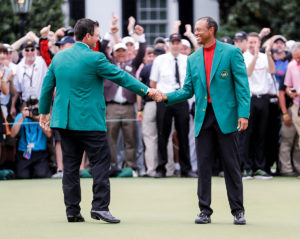