Founded in 1897 by the Late Madhavrao Jayajirao Scindia, the CBSE affiliated ‘Scindia School” is Gwalior’s unique gift to modern India. This residential school for boys is acknowledged today as one of the finest public schools in India. Shri Jyotiraditya Madhavrao Scindia, MP is currently the president of the Board of Governors and continues to strengthen the Scindia family’s long-standing commitment to the school.

The school has a central alumni body known as “The Scindia Old Boys Association” with 30 regional chapters spread pan India. The Gurugram Chapter of the Scindia Old Boy’s Association hosted and organized a golf tournament & lunch on Saturday the 24th of March 2018 at the Classic Golf & Country Club, Gurugram.

The golf tournament was followed by a lunch at the Grand Bharat where many ex-students (fondly known as Scindians) joined the celebrations to commemorate 121 glorious years of the school. The lunch saw an attendance of over 140 guests and the Chief Guest was Shri PM Khar an erstwhile teacher of the school who had taught many old boys that were present in the room ranging from the batches of 1960s to 1990s. Shri PM Khar  has been associated with the school for over 4 decades. Industrialist Mr. Vinay Kumar Modi an old boy and erstwhile member of the board of governors of the school was the guest of honor along-with Mr. GS Bakshi, Director Alumni relations of the Scindia School.

Lt. Gen SPS Dhillon an old boy from the batch of 1965 and a member of the alumni advisory board of the Gurugram chapter shared that “it is always a pleasure to play at this beautiful golf course and I congratulate Mr. Hariharan and his team lead by Keshav Kumar from Classic Golf Resort who have really worked wonders to present such magnificent playing conditions and make the entire day enjoyable and memorable for so many Scindians present”.

Mr. Arun Kanodia also an old boy from the batch of 1965 and a member of the alumni advisory board of the Gurugram chapter shared that there are two fourballs in the field today comprising of Scindians from the batch of 1965 and to be able to spend such quality time with your childhood friends and also witness such a wide band-with of old boys ranging from batches of 1965 to 2007 brings back many fond memories of school and is truly a pleasurable sight.

Mr. Vivek Talwar an old boy from the batch of 1992 and the General Secretary of the Gurugram chapter of the Scindia School Old Boys Association shared with Golf Plus Monthly that “This golf tournament is another step towards deeper engagement and strengthening the bond between our alumni members. Sports is an integral element of the overall holistic development at The Scindia School and you would find most Scindians actively participating in sport activities even after completing their education at Scindia, be it in corporate teams or individual fitness commitments. We are fortunate to have been given the exposure early in life at Scindia to work as effective team players and build progressive careers in life. It’s a privilege for the Gurugram chapter of the old boys association to host this tournament and its absolutely wonderful to see such a high turnout”.

Mr. Hardeep Sahni, fondly known as “bob” is an avid golfer and treasurer of the Gurugram chapter of the old boys association who says that golf is a sport that is actively pursued by professionals in today’s day and age and the Scindia school alumni fraternity is also witnessing a steep rise in the number of golfers. Our vision is to promote the sport PAN India in our rich spread of 30 alumni chapters and eventually have each chapter host a golf tournament in partnership with the local administration and promote the rich heritage of the hosting city. We thank golf plus monthly for supporting us in this tournament and we look forward to such continued support for prompting the sport together.

Results of the golf tournament:

The beautiful trophies on display

Mr. IS Choudhary receiving the Closest to Pin award

L-R: Mohnish Jain (Scindia 2002), Karhun Nanda (Scindia 1992), Vivek Talwar (Scindia 1992) and Deshant Kaila (Scindia 1992). Keeping in line with the “For the alumni, by the alumni” motto, many old boys happily sponsored the golf event and many tee boxes had family names of generations that had studied at The Scindia School. The picturesque Classic Golf Resort ….. a grand welcome for all the participants at 6 am. 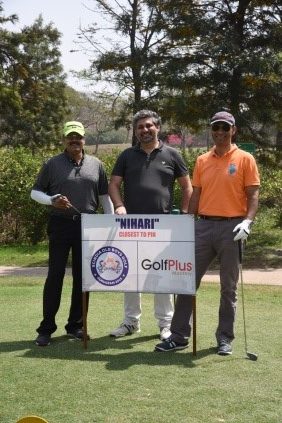 The “Nihari” hole ….. fondly named after the mid-day snack given to students at The Scindia School shortly before the evening sports time.